An already weak labor market is likely to be further battered by high gas prices. Economists expect more layofffs in the next few months. 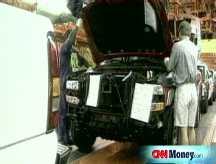 NEW YORK (CNNMoney.com) -- The labor market was having enough trouble so far this year.

Now, fears about $4 gas and near-record oil prices are likely to throw more fuel on the unemployment fire.

On Friday, the Labor Department will release the May jobs report. Economists surveyed by Briefing.com forecast a net job loss of 60,000, the fifth straight month of job cuts. There have already been 260,000 job losses through the first fourt months of 2008.

The unemployment rate is expected to climb to 5.1% from 5% in April.

And the worst for the job market may not be over. Many economists say job losses could intensify during the rest of the year due to rising energy prices.

In fact, Thursday Continental Airlines (CAL, Fortune 500), the nation's No. 4 carrier, announced it would ground planes and eliminate about 3,000 jobs as it struggled with high fuel costs.

The move follows the announcement Wednesday by UAL's (UAUA, Fortune 500) United Airlines, the nation's No. 2 airline, that it would cut flights and layoff up to 1,600 employees.

Other airlines are expected to make similar moves soon. And there could also be losses from smaller airlines going out of business. Several have halted operations in the last two months.

"Airlines always go out of business in these periods of oil shocks," said David Wyss, chief economist for Standard & Poor's.

In addition, No. 1 automaker General Motors (GM, Fortune 500) announced on Tuesday it would close two U.S. assembly plants that produce SUVs, along with truck plants in Canada and Mexico as consumers buy more fuel efficient vehicles.

Ford Motor (F, Fortune 500) has said it's considering plant closings of its own for the same reason. More immediate cutbacks in light truck production are also planned.

To be sure, GM and Ford both plan to take advantage of greater demand for smaller cars. But this shift is likely to benefit Asian automakers more. That probably will mean further sales declines and losses, not to mention layoffs, for U.S. automakers.

"It seems like the country is just at the beginning of companies coming to terms with what higher oil prices are going to mean," said John Challenger, CEO of outplacement firm Challenger, Gray & Christmas.

According to a survey by Challenger for May, there were 103,522 total layoffs that month, a level not seen since 2005. And nearly a third of those layoffs came from the automotive sector.

Woes extend beyond airlines and autos

But it's not just airlines and automakers that could start trimming staffs as they struggle with high energy costs. Economists say the job losses could be much more widespread.

With consumers needing to shell out more cash on food and gas, they may pull back on other spending, notes Anirvan Banerji, director of research for the Economic Cycle Research Institute. That could lead to a job cuts for a wide range of retailers as well as manufacturers of flat-screen televisions and other high-priced consumer gadgets.

The continued problems in the credit and real estate markets also remain an issue for employers.

The collapse of Bear Stearns, which was bought at a fire sale price by JPMorgan Chase (JPM, Fortune 500), is just the most visible example of job losses in the sector.

For this reason, Keith Hembre, chief economist of First American Funds, said unemployment should keep rising into next year.

He said as long as corporate profits keep getting squeezed by energy costs and weak consumer spending, employers will be reluctant to hire.

And he added that corporate profits show no sign of substantially recovering anytime soon, especially in the beaten down financial sector.

What's more, it's highly likely that auto companies and airlines may report losses in the second quarter and beyond, putting even more pressure on them to cut costs.