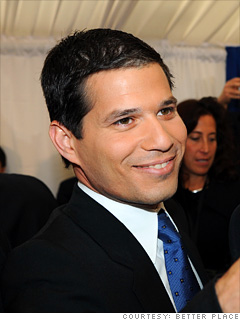 The best pieces of advice I got occurred around the holidays in late 2006. The first piece of advice came from former President Bill Clinton at the Saban Forum in Washington. I told the President about my idea to sell electric cars through dealers. He listened to the whole thing, and then he looked at me and said, "You're solving the right problem at the wrong time. The average Joe doesn't go to a dealership; he buys a nine-year-old used car and drives it into the ground, and then he buys another nine-year-old car. You need to figure out how to get the average Joe in an electric car for free and still make money." When I asked how, President Clinton said, "You're the smart guy--you figure it out." And he turned and walked away. President Clinton was the guy who ultimately drove us to switch our model. A few weeks later I was in Israel, and I was speaking with Israeli President Shimon Peres [who also heard my presentation at the Saban Forum]. When I originally pitched the idea, I suggested that the government create an agency to make it happen. I wasn't thinking about it as a company, but more as an arm of government. President Peres told me, "Agencies don't do things. Entrepreneurs do things." He said, "You have to start a company. Otherwise, this is just an idea. You have a good job, but this is a better job because you can save the world." A few days later I quit my job at SAP.