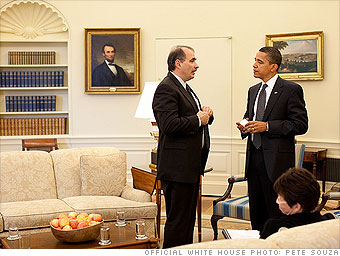 Gary Hart [the former presidential candidate from Colorado] gave me the advice over beers at the Quadrangle Club at the University of Chicago in 1987, where he had just given a speech. He said Washington was one big echo chamber of conventional wisdom clanging around. He told me, "Washington is always the last to get the news." I didn't think much about his words then, but they stuck with me and helped me later in life and in the Obama campaign. There were many times when Washington conventional wisdom wrote us off or insisted we were making suicidal mistakes.

They questioned our focus on Iowa, saying we needed to run a national campaign. For most of 2007, from July to November, the conventional wisdom insisted we had blown our opportunity. Hillary Clinton had a 30-point lead. But we thought that if we won Iowa we could prevail, and we just got pummeled by people in Washington saying we were going to lose. In the spring of 2008 they said we were crazy to oppose eliminating the gas tax when our opponents were proposing it as a way to ease the crush of high gas prices. People thought we'd made this critical error. But we thought our position was honest and forthright and people would recognize a gimmick when they saw one. The interchange on those issues actually propelled us to a strong position in the North Carolina and Indiana primaries. The third time we ignored Washington was when Sarah Palin was picked. They said it was a masterstroke by McCain. But Obama said it took him four to five months to get the hang of being a candidate, so I knew it would be tough to make that adjustment in three weeks.

When I was a political reporter, the paper tried to send me here [Washington, D.C.], and I refused. In 1998, when the Monica Lewinsky story broke and reporter friends said Clinton would resign, I went to Manny's Deli in Chicago, where there was an older woman, 68. She was a cashier who had to keep working to make ends meet. She said, "This guy Clinton seems to be trying to help us, so why don't they get off his ass?" I called my reporter friends in D.C. and said they need to come to Manny's.

NEXT: Tory Burch: Trust your instincts