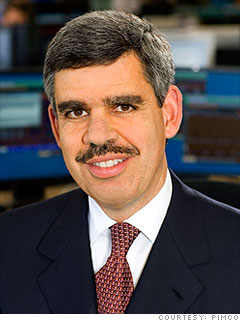 We were living in Paris, back when my father was Egypt's ambassador to France. Each day we used to get at least four daily newspapers, from Le Figaro on the right side of the political spectrum to L'Humanité, which was the newspaper of the Communist Party. I remember asking my father, Why do we need four newspapers? He said to me, "Unless you read different points of view, your mind will eventually close, and you'll become a prisoner to a certain point of view that you'll never question."

Reading widely is particularly important right now. Most of the market research these days asks the same question: Is this the market bottom? To answer that question, they look at historical valuations and try to extrapolate from them. And most of the time that is the correct approach. However, right now we are going through major and unpredictable changes in the financial landscape. As a result, "Is this the bottom?" is the wrong question. But you have to read other people like [New York University economics professor Nouriel] Roubini, like [The Black Swan author] Nassim Taleb, and some of the behavioral-finance guys to understand why the question is wrong. The question we should be asking is, In this new world how do the historical variables morph, and what are the unintended consequences of government policy? There's a tendency for everyone to operate in a comfort zone and to want to read what is familiar to them. But if you are just used to following one person or one news­paper, you will miss these big shifts.