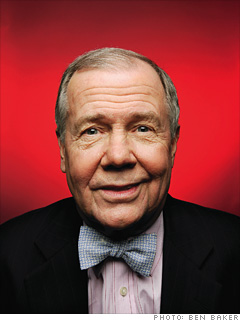 The best advice I ever got was on an airplane. It was in my early days on Wall Street. I was flying to Chicago, and I sat next to an older guy. Anyway, I remember him as being an old guy, which means he may have been 40. He told me to read everything. If you get interested in a company and you read the annual report, he said, you will have done more than 98% of the people on Wall Street. And if you read the footnotes in the annual report you will have done more than 100% of the people on Wall Street. I realized right away that if I just literally read a company's annual report and the notes -- or better yet, two or three years of reports -- that I would know much more than others. Professional investors used to sort of be dazzled. Everyone seemed to think I was smart. I later realized that I had to do more than just that. I learned that I had to read the annual reports of those I am investing in and their competitors' annual reports, the trade journals, and everything that I could get my hands on. But I realized that most people don't bother even doing the basic homework. And if I did even more, I'd be so far ahead that I'd probably be able to find successful investments.

NEXT: Scott Boras: Be effective, not popular