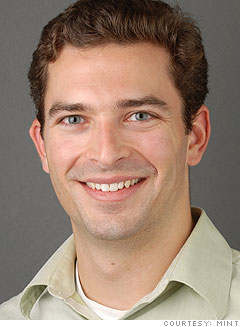 When I was first starting Mint I would oscillate emotionally day-to-day. I was the sole founder and started the company when I was 25. I would go back and forth between thinking, "This is the best idea ever," and then other days asking myself, "Who am I, as a 25-year-old kid, to take on Intuit with Quicken and Microsoft? Who am I to do that?" I kept thinking to myself, this is really an emotional rollercoaster.

At that time I met Jeremy Stoppelman, the CEO and co-founder of Yelp.com, at a party for entrepreneurs called "Founders Brunch" (run by Auren Hoffman). He was the first and probably only guy who was like, "For the first year that Yelp was founded, I was on that rollercoaster -- panicked sometimes, elated sometimes. After it gets up and running for a year, it's still tough, but you don't have that 'nearing mental breakdown' stage on a day-to-day basis." It was the first time anyone had come clean.

For first-time entrepreneurs there's a macho attitude that you [can] never show doubt or weakness, but truth is, you face it every day. That personal admission, that self-doubt, that lack of confidence, or wild emotional swings are part of the game when you're starting a company. I probably met with 40 or 50 VCs or angel investors before I got my first "yes." I met Jeremy after 25 rejections and I wasn't yet ready to give up, but I was at a point where it was rough. Jeremy taught me that self-doubt, and even a failing in self-confidence, is perfectly normal and that all you have to do is keep trying and keep pushing through.

NEXT: Niklas Savander: Be nice to people