Mort Zuckerman: Do what you love 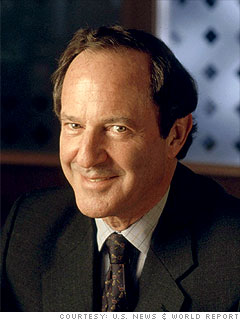 So I decided I was going to give myself three years to try something that I was always interested in. I was always fascinated by urban life, and I grew up in Montreal, where the residential areas were closer to the downtown part of the city. The father of one of my best friends was in the real estate business, and I thought he had a wonderful life because he traveled a lot and seemed to be building things. And I really liked building things. (And as I once said when I was a teacher, he also had a lot of women chasing him, which I thought came out of the profession. A student then asked me, "Well, has it worked?" And I said, "Well, I travel an awful lot.") So I went into a field that I really liked. I got a job in Boston with Cabot Cabot & Forbes, in real estate development. Since I loved both urban life and journalism -- I was a journalism addict when I was 12 years old -- all I did was pursue those two careers. And I feel as if I've never worked a day in my life.