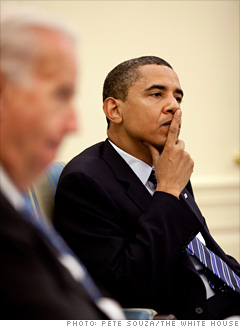 • TalkBack: Reader picks for dumbest moment
You're eight months behind on your $500,000 mortgage, your bank is demanding a meeting, and you respond by telling them there's nothing to worry about. Why not? Because you just saved $40 by canceling your newspaper subscription.

That, essentially, is the kind of fast budget talk President Obama trotted out in April when he made a big to-do out of instructing his cabinet to cut $100 million from their budgets.

$100 million may sound like a big number, but the cut would only reduce the United States' projected $1.8 trillion budget deficit by 0.005% -- less than what you'd save for your mortgage by giving up the daily paper.