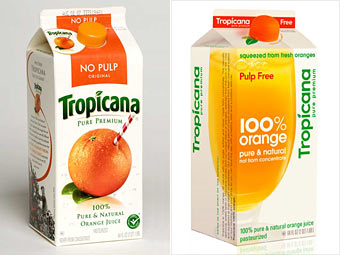 • TalkBack: Reader picks for dumbest moment
Tropicana drinkers, it turns out, are as passionate about packaging as they are about pulp. That's why they rebelled when parent company PepsiCo and consultancy Arnell overhauled the juice line's packaging in January as part of a $35 million branding campaign called "Squeeze."

Tropicana fans said the simplicity of the new design reminded them of store-brand generics. And who wants to be mistaken for a generic consumer?

Within a month, the public's flogging by e-mail, phone, and blogs forced PepsiCo to bring back the old straw-in-an-orange cartons. Other parts of the campaign remain, but PepsiCo will probably think twice before it tries updating this icon again.