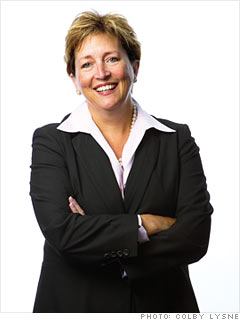 The recruitment, training, and retention of the largest private workforce in the world (two million) falls to Chambers, who began her career at Wal-Mart in 1999 after 14 years with Hallmark. That puts her at the center of a contentious debate about Wal-Mart's pay and benefits, but the chatter has quieted somewhat since Wal-Mart overhauled its health plan this year. The stock is up 33% over the past year.