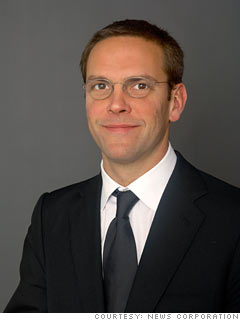 The second son of media titan Rupert Murdoch -- older brother Lachlan left his job at News Corp. in 2005 but still sits on the board -- James is the heir apparent to his father's $33 billion empire (and No. 3 on our 40 Under 40 list).

As the head of the company's publishing, television, and digital interests in Europe and Asia, he oversees News International (publisher of The Times and The Sun in London), SKY Italia, and Star TV, and serves as the non-executive chairman of British SKY Broadcasting.