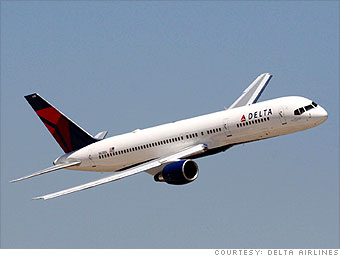 The world's biggest airline, fresh off its acquisition of rival Northwest, saw revenue soar as it raised fares and started flying to more international destinations. But the big merger came at a steep cost. Though the deal will help Delta gain the scale it believes it needs to survive future turbulence, the company ended up taking $7.3 billion in writedowns on the value of acquired assets and $1.1 billion in merger-related charges.

Those costs, together with losses from fuel prices hitting records during the busy summer months and a pay raise for pilots, have taken the wind out of Delta's sails: Shares that traded at $20 a share as recently as the end of 2007 recently fetched just $7.