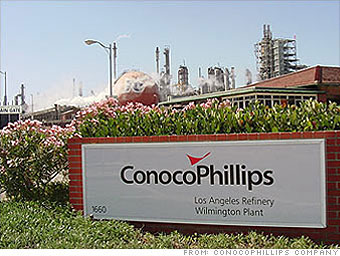 How did America's No. 3 oil company manage to lose money in a year that saw the price of crude oil soar to its all-time high? Let's say Conoco, like so many of its peers, was forced to face the fact that it had overpaid on the acquisition trail.

In the fourth quarter, Conoco took a $35 billion writedown of its oil and natural gas producing properties, largely reflecting the second-half plunge in commodity prices - and the hefty premiums the company paid in the 2002 merger of Conoco and Phillips and the 2006 acquisition of Burlington Resources. By contrast, ExxonMobil, the biggest oiler and a recent holdout in the merger game, spent 2008 churning out the biggest-ever profit in Fortune 500 history. No wonder Conoco shareholder Warren Buffett recently termed his decision to purchase the stock at the peak of the oil bubble "a major mistake."