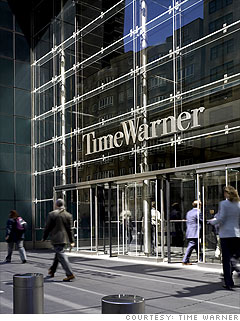 Time Warner finally acknowledged what the market has long been telling it: The media business has changed forever, and not for the better. Time Warner wrote down the value of its cable, publishing and AOL divisions to the tune of $25 billion. The biggest writedown was for cable, where Time Warner had been significantly overvaluing its franchise rights in an era when cable systems compete with each other, satellites, the Web, and even cell phones for viewers. AOL and publishing arm Time Inc. (which owns Fortune) took hits thanks to a diminishing advertising market and again, more competition from new media sources.

Businesses like movies and TV did fairly well, with hits like "The Dark Knight" in the theaters and "Two and a Half Men" on the small screen. But with its spinoff of Time Warner Cable complete, Time Warner took a step a rich media company might once have deemed unthinkable: a reverse stock split, for the sake of rescuing the shares from the depths of their single-digit despair.