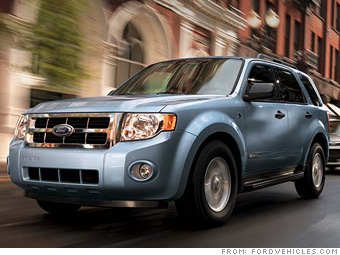 Ford emerged in 2008 as the healthiest patient in the ICU. Unlike domestic rivals GM and Chrysler, it didn't take federal bailout funds, thanks in part to cash it got from the sales of Jaguar and Land Rover and a big raft of loans it took out just after CEO Alan Mulally took over. What's more, Ford has already reached an agreement with the United Auto Workers union on a more competitive pay plan.

Yet the company still lost nearly $12 billion from operations in 2008, as sales tumbled and prices slumped. And unlike GM and Chrysler, which are separate from their financing arms, Ford still owns its finance unit - which left it holding $2.6 billion on bad loans to car buyers. Still, Ford actually gained a sliver of market share from GM and Chrysler last year, and its new hybrid - the Fusion, which gearheads are calling the best gas-electric car yet - may make Mulally the only Big Three chief to keep his job.