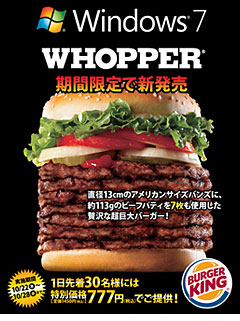 After Microsoft released Windows 7 in October, Burger Kings in Japan unveiled the Windows 7 Whopper: a seven-patty, 2,120 calorie burger. The first 30 burgers sold at each location went for 777 yen ($8.60). After that, the price nearly doubled. Despite Microsoft's propensity for glitches, there were no known bugs in the burgers.

Software-inspired food didn't end there. Kraft's attempt to make a smoother, milder Vegemite for Australians flopped when it named the new spread "iSnack 2.0." The name drew such ridicule that Kraft pulled it and replaced it with a "name here" contest. The winner? "Cheesybite." Must be an Australian thing.

NEXT: Silverdome sells for less than a house