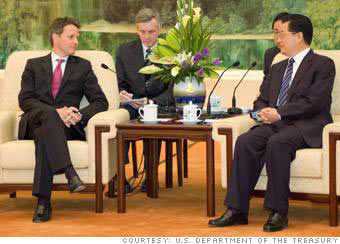 Following a speech at Peking University on his first trip to China as Treasury Secretary, Tim Geithner was asked to share his thoughts about the safety of Chinese investments in the United States. They are "VERY safe," he quickly asserted.

At which point the audience burst out laughing. Apparently, the audience was amused not only by the answer's substance, but by the flat "don't worry your little young heads about it" certainty with which Geithner insisted that China's U.S. debt holdings were A-OK. Because as even a group of Chinese college kids understood, that's just not as clear as the Treasury Secretary insisted it was.