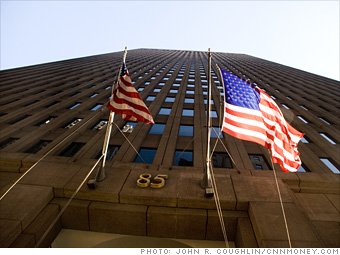 Wall Street's meltdown is so 2008. Goldman - which reorganized as a bank holding company, received billions in government help, and repaid some $10 billion in Troubled Asset Relief Program debt with interest this past spring -- generated billions in profits in 2009. In the first 9 months of that year alone, Goldman set aside $16.2 billion for compensation, enough to pay employees nearly $500,000 apiece.

Although the firm said that its total compensation was lower than in 2007, a political uproar is already in full swing. To calm public anger, Goldman may pay more of its bonuses in stock, or ask employees to donate a percent of their earnings to charity. And the 30 top honchos at Goldman have agreed that instead of the usual cash payment, they'll take their bonuses in the form of stock they can't sell for five years.

No matter how it turns out, all employees will surely do well. The lowest-paid employees get at least $6,000 pumped into their 401(k) accounts. Goldman's stock grant plan was expanded to include more employees. Cash bonuses for much of senior management beyond the top 30 were expected to be in line with the 2008 payout, when Goldman awarded bonuses of more than $1 million to 953 employees and bonuses of more than $5 million to 78 executives.