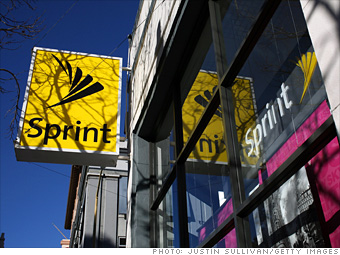 Fortune 500 rank: 67
2009 loss: $2.4 billion
The wireless carrier got another wake-up call in 2009 when it reported its third annual loss in a row. Sprint has struggled to hold onto subscribers amid an increasingly competitive industry made only more cutthroat by the recession. It lost 1 million retail subscribers in 2009, although that's an improvement over the 5 million that dropped Sprint the year before. The company has been trying to improve customer service and offer better phone selection to draw and keep users.
One positive has been Sprint's prepaid service, which grew this year through the acquisition of Virgin Mobile USA. But prepaid users are not as lucrative as contract customers, and the new focus has hurt revenue. The company slashed thousands from its payroll in 2009 to save $1.5 billion a year, but took a significant charge related to the severance.