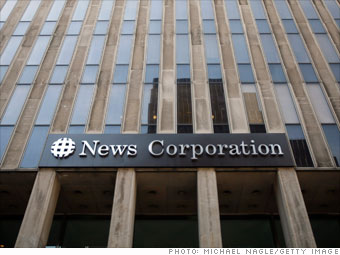 Fortune 500 rank: 76
2009 loss: $3.4 billion
"Quality journalism is not cheap," CEO Rupert Murdoch said during an earnings call, and he's got News Corp's 2009 results to prove it. The parent company of The Wall Street Journal lowered its forecasts twice during the year and ended up taking an almost $9 billion write-down prompted by the decline in the growth of ad revenue and its stock price.
MySpace, which News Corp. bought in 2005, has also been a headache as its users have migrated to Facebook. The company took a charge on the social networking site during the fourth quarter, and has reduced headcount to cut costs.
While advertising was weak across most divisions, it has seen some "signs of life," according to Murdoch. News Corp's cable networking unit, which includes Fox News, helped buffer poor results with revenues and operating income showing double-digit growth.