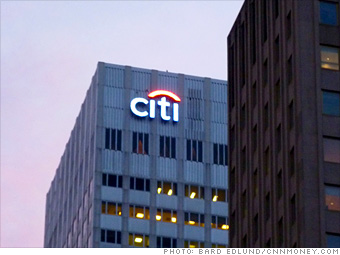 Fortune 500 rank: 12
2009 loss: $1.6 billion
Compared with 2008's $27.7 billion loss, this year's $1.6 billion deficit makes Citigroup look like a turnaround story. But Citi was the most unstable of the big banks during the crisis and has been one of the slowest to recover.
It received $45 billion under TARP, and this year a $6.2 billion charge tied to its repayment of bailout money hit results. Meanwhile attempts to sell unwanted assets have been slow-going, although Citi's gain on the sale of Smith Barney cushioned the blow this year.
Management has cut headcount by about a third, but churn at the executive level has been disruptive. The company has had to allocate billions of dollars to cover loans that will never be repaid, amid continued mortgage and credit card-related losses.