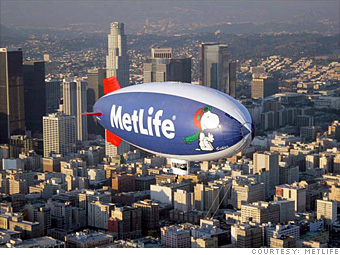 Fortune 500 rank: 51
2009 loss: $2.2 billion
MetLife did a 180 in 2009, swinging to a big loss from a fiscal 2008 profit. In the end it came down to the more than $5 billion in investment losses stemming from freestanding derivatives -- the bane of many financial services companies.
The news isn't all bad. The nation's life insurer said no to TARP money and turned a profit in its fourth quarter after three consecutive periods of decline. It also just agreed to buy AIG's American Life Insurance Company for more than $15 billion, with the intention of becoming an international player.
But the deal doesn't come without risk. Rating agencies Moody's and Standard & Poor's have signaled that they're paying close attention to the acquisition.