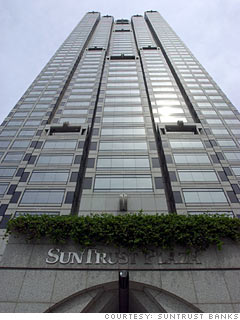 Fortune 500 rank: 224
2009 loss: $1.6 billion
The Atlanta-based regional lender, which serves one of the areas of the country most affected by the financial crisis, has been hit hard by the collapse of the real estate market. Its total loans dropped on declining demand from customers, but also on its attempts to cut exposure to troublesome real estate-related lending -- especially in construction.
During the first quarter, SunTrust took a more than $700 million charge as the value of some of its businesses declined due to a weak housing market. During the year, it also increased the amount of money put aside for future credit losses to almost $1 billion. Non-performing loans grew by $1.5 billion, driven partly by a rise in defaulting clients.
Even after five back-to-back quarters of losses, SunTrust isn't out of the woods yet. Analysts are predicting that it won't turn a profit until next year.