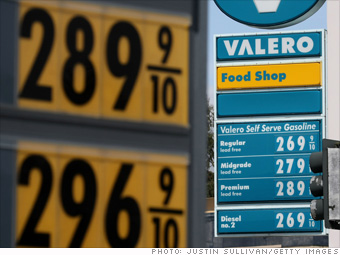 Fortune 500 rank: 26
2009 loss: $2.0 billion
In 2008, Valero ranked No. 16 on the Fortune 500 with profits of $5.2 billion. These days it's a different world for the refiner, which in the past year faced its worst market for fuel in almost three decades. Refineries have operated well below capacity as gasoline demand dropped during the recession. The company shut down its Delaware City, Del., refinery, which was losing $1 million a day, and took an almost $2 billion loss.
Valero processes medium and heavy crude, which is cheaper to buy but costlier to process than other varieties. During the downturn, the price of crude climbed, hurting profits. One upside may be the company's move into the ethanol business. It acquired several refineries this year, and the new business unit bumped its operating income by $165 million.