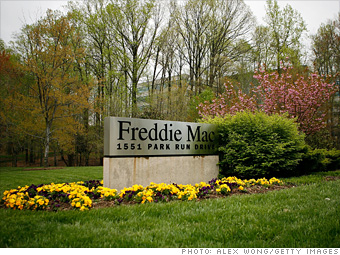 Fortune 500 rank: 54
2009 loss: $21.6 billion
You know it's bad when good news means turning a profit in just one quarter of the year. But that's what it means to be Freddie Mac these days.

Almost 4% of the housing lender's borrowers were in foreclosure or at least 90 days late on payments, and by the end of the 2009, Freddie and Fannie had together received more than $110 billion from Uncle Sam.

Freddie expects a further rise in foreclosures and has seen a jump in defaults not just on risky mortgages but on those once viewed as solid. The company has warned there can be "no assurances regarding when, or if, we will return to profitability."