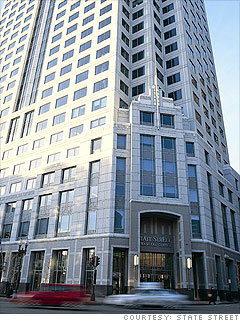 Fortune 500 rank: 249
2009 loss: $1.9 billion
The banking company that acts as a custodian and focuses on wealthy and institutional clients expanded its business during the boom years and paid the price. After losses in some of its fixed-income funds, litigation led it to reimburse hundreds of millions to investors.
But the main hit to profits stemmed from a $3.86 billion loss tied to off-balance-sheet vehicles called "conduits" through which State Street raised money from short-term investors and invested in long-term assets. The company broke the venerable rule, "Don't borrow short and lend long."
On the upside, State Street passed the government's stress test and has repaid its $2 billion in TARP money. Business turned around in the fourth quarter when the company got a lift thanks to an improved bond and stock market.