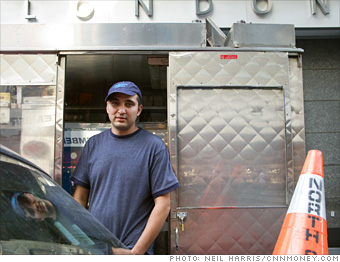 I've been here for more than 10 years, Monday through Friday from 6 a.m. to 11 a.m. When the reporters came that week, I wanted them to leave the employees alone. They were everywhere, asking them, "How does it feel to be fired?" and "What are you going to do now?"

So on the second day I put up a sign. It said, "No coffee for reporters of Lehman Brothers." One reporter, I saw his badge, he came up and started laughing when he saw the sign. He said, "Can I have some coffee?" and I said no. "You're not going to give me coffee? You don't want my money?" and I told him, No, just leave them alone. I don't need your money or your business.

The firings affected me, too. I knew a lot of them. They came to me every day. It seemed to last about a month, reporters coming and going. There was one who was nice. I don't know where she was from, but she gave me some money -- maybe $100 -- and told me to buy coffee for any of the employees who were laid off. So I gave them free coffee. It was the least I could do.

I still have the sign. It's in the back of my car. It's pretty old now.