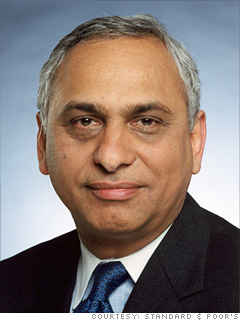 I did have faith during the crisis that the financial system would survive, but that weekend highlighted its fragility. The risk transference that securitization was intended to create, in hindsight, didn't work as designed. But it did make things even more interconnected across the capital markets, across different market participants, across asset pools, and across geographies. That weekend made you understand the true connectedness of markets, and it had a huge impact on the speed and severity of the crisis, which shocked me.

As a leader in an analytical business that plays an important role in the marketplace, that weekend made me rethink my company's transparency. We were in an uncertain environment, so I sent my employees two messages. The first was to listen, watch, and observe things you did not normally observe. Take your blinders off. Second, keep your focus. It's very easy to lose focus on the role and purpose we play in the markets.

Transparency became a principle that we rallied around as an organization, both in terms of what we do and how we communicate internally. During the crisis we knew that not everything would be simple and straightforward, but that it would be easier to deal with if we were transparent and open.

NEXT: Amy Brinkley: Unlike anything in my lifetime