Barbara Byrne: Proud of what I did at Lehman 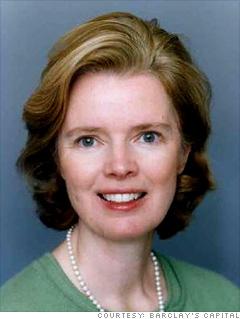 I went to this wedding reception on Saturday night and everybody was treating me as if I was at my own wake.... The weekend was massively uncertain, and then there was a certainty on Monday of Lehman being gone, of the circus of media outside the building, which was very surreal, because you had to walk through these people, and they all wanted stories, and nobody could tell a story at that point in time because no one knew what they were.

Then you had Tuesday. And Tuesday was amazing. It started off with the depths of despair, and it ended up with being a very positive day because around 2:45 on that Tuesday afternoon, Barclays' Bob Diamond came on the trading floor to announce that indeed a deal had been reached [to buy a portion of Lehman]. He came onto the trading floor wearing a green tie and green cuff-links, and if you had been at Lehman Brothers, Lehman was a very tight culture -- they bled Lehman green.

It meant a lot to people for him to acknowledge what it must have been like to be a career Lehman person and to be in that situation, to have a friend that you love not just die but die violently and to be really destroyed on a reputational basis.... I am now, a year later, very proud of what I did at Lehman. I'm not proud of how Lehman ended, but Lehman is not September 15th, 2008.