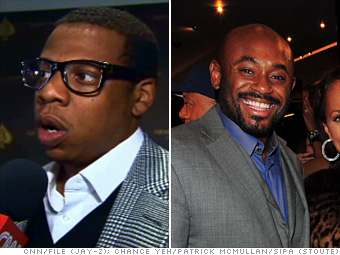 Roc Nation, Translation Advertising
Ages: Both are 39
Marital status: Jay-Z is married, Stoute is single
Jay-Z is co-founder of Roc-A-Fella Records and the Roca-wear clothing brand (sold for $204 million in 2007) and the former president of Def Jam. His latest album is his 11th to hit No. 1, the most by any solo artist ever.

Stoute, former EVP of Interscope Records, founded marketing firm Translation Consultation & Brand Imaging, which paired Justin Timberlake with McDonald's for "I'm Lovin' It" before he sold it to Interpublic.

The pals now run a division that helps giants like State Farm and Johnson & Johnson reach the urban market.