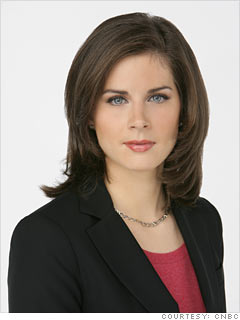 Now she's moving to deliver market news to more than just day traders: She explains the economic crisis on Meet the Press and guest-hosted NBC's Today in June.

Burnett, who started out as an analyst for Goldman Sachs, is staying in cable for now: CNBC has locked her up through 2011.

Power of persuasion: She got her break in TV after writing a "stalker letter" to then-CNN anchor Willow Bay.