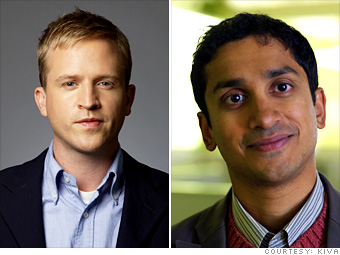 Microlending spurs startups (7/9/09)
President and Co-Founder/CEO, Kiva.org
Ages: 34 and 32
Marital status: Both are single
Highest Education: Shah: Bachelor's degree, Flannery: Master's degree
Their four-year-old microfinance site redefined giving by persuading individuals to lend as little as $25 to small businesses in the developing world and today in the U.S.; Kiva's 574,000 citizen lenders have since lent $96 million.

Flannery was a programmer at Tivo, Shah a product manager at PayPal. They're now the "it" boys for philanthropy 2.0. (Flannery's ex-wife, Jessica Jackley, a co-founder, has moved on.)