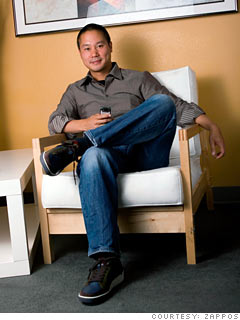 He's grown it from $1.6 million in sales to $1 billion, largely by encouraging fierce customer loyalty (Zappos has free, eerily fast shipping both ways). In July, Amazon said it would acquire it for $850 million.

Test of faith: He offers $2,000 to any new recruit to leave the company during training to weed out the half-hearted.