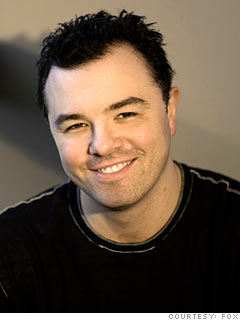 In year two of a $100 million-plus contract that keeps him at the network until 2012, MacFarlane is also shepherding a spinoff called The Cleveland Show, his third in primetime. And while Fox was waffling over his contract extension last year, he signed a deal with Google to produce online comedy sketches.

This year Family Guy earned an Emmy nod for a comedy series--the first animated show to do so since The Flintstones in 1961.