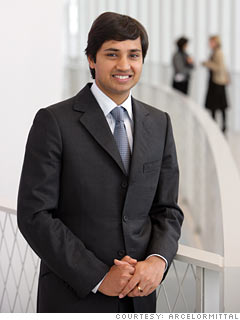 CFO, ArcelorMittal
Age: 33
Marital status: Married
Highest Education: Bachelor's degree
Many an heir has been accused of not paying his dues, but the son of Indian steel tycoon Lakshmi Mittal cut his teeth as an investment banker at Credit Suisse First Boston, then joined his father in 1997--and worked his way up to become the company's well-respected CFO.

He's led a strategy of growth by acquisition, most notably orchestrating the $38 billion takeover of European rival Arcelor. Now he has to reduce the company's debt by $10 billion.

New duties: In May he joined the board of French luxury goods firm PPR.

NEXT: Biz Stone and Evan Williams