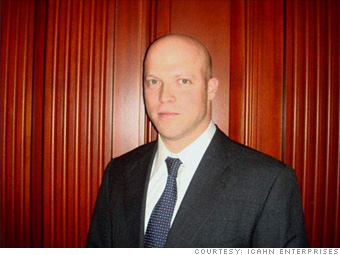 Senior VP, Icahn Capital
Age: 36
Marital status: Single
Highest Education: Bachelor's degree
It can't be easy working for cage-rattler Carl Icahn, but Meister, one of Icahn's top lieutenants, seems to have figured it out. The Harvard-educated son of a high-ranking Aon executive worked as an analyst at Lazard and then at private equity's Northstar Capital before hooking up with Icahn.

Now he's one of his top prospectors and manages his $3 billion hedge fund. He's starting to come out from his boss's long shadow: He sits on the board of Motorola and several other portfolio companies.